In 2012-2013 Overbay put aside her practice to initiate a mural in response to the blight and violence of her neighborhood of Crown Heights Brooklyn. She generated support from NY Senator Eric Adams with Chief of Staff Ingrid P. Lewis Martin, local shopkeepers, the Kingston Avenue Merchants Association, local families and neighbors, the Crown Heights Mediation Center, a Real Estate developer, shopkeepers and the Brooklyn Childrens Museum.  She hired local high school art students to draw and paint the mural in her studio for the year. She was presented with a Citizens Award in 2013 from Senator Adams.

Called “ASPIRE.GO” the mural depicts local children talking, moving, jumping, dancing and skate boarding in the air. The movement across the forty feet is treated like a  musical scale that can be read when passing on the sidewalk or the street.  There are thoughts depicted around them in the air about their future.  Above their heads are the shapes of the countries represented in the Crown Heights community painted as white clouds that are a part of their past. 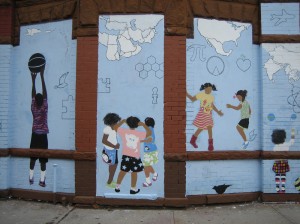 The project was a political art action to improve the environment of the children from PS289, two charter schools, and the Progressive High School for Boys, all within a three block area of the mural. It has erased a blighted façade with an image of future hope. The Crown Heights Mediation Center’s Celebration of Art Against Violence takes place every August at the mural site on Kingston Avenue.